Since we have had a mild winter, allowing us to get a lot of work done in the vineyard besides pruning, bud break has been early. And an early bud break means that the open buds and young leaves are very sensitive to frost. When the bud is swelling up or is “in the cotton”, it can endure temperatures down to 28 F before seeing significant damage. It was the case in early April. But once the young leaves are apparent, the threshold rises to 30 to 32 F. 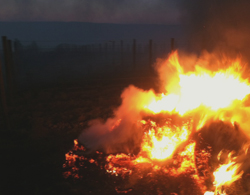 Well, for the last three days, we have had brutal cold temperatures at night. Tonight is technically Monday morning, April 30, 3 o’clock in the morning. It is the third night we have been burning hay bales in order to protect the young buds. Friday night the lower temperature measured in the vineyard was 25 F, Saturday night the thermometer plummeted to 23 F at five o’clock in the morning, and right now we are at 30 F and expecting the temperature to drop to 28 F by five o’clock.

Needless to say, we got hit by spring frost! The damage is hard to estimate at the moment on the primary buds. Some of them are brown and crisp on the outside, so we can hope that only the outer leaves have been touched. Some others are very crispy: they are obviously lost. Saturday night being the coldest, some of our neighbors were also burning hay bales. 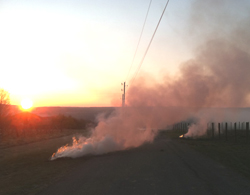 Doing so, as long as the wind velocity is minimal, creates a foggy blanket above the vineyard which limits the loss of heat from the ground, limiting the frost damage. Too much wind can have a dramatic effect: the warm air created by the burning moving out, it sucks in more cold air from underneath, accentuating the frost damage.

At ingle Vineyard, John, Nate and Kyle also burned hay over the weekend. The temperature there did not drop as much as here at the winery. I have good hope that the damage there is minimal. John found himself a sweet spot for his vineyard, on Canandaigua Lake! 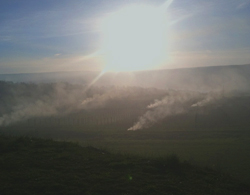 So, for the last three nights, with Zac and Ethan, we have been staying up all night, burning hay bales, and replenishing the vineyard with new ones during the day.

Saturday, April 28 was the first round of our Wine club members VIP tour. The second round is scheduled for May 12. The event is reserved to our Wine Club members and their guests: after meeting in the tower around a glass of Chardonnay, Muscat or Cabernet franc Reserve, the group headed down to the cellar where we sampled a couple of tanks and a few barrels. Lunch was prepared by Mike “Ollie” Oliver, Blue Heron Café Director, and paired with a selection of Heron Hill and Ingle Vineyards’ wines. And I added a sneak preview of soon to be released wines. Ollie surprised us with a few discoveries of his own, and a to die for dessert! I don’t want to ruin the surprise for the Club members coming to visit us in a couple of weeks. I personally had a blast meeting newer members and seeing some die-hard fans whom I had met last year during this very same event. It was great for me to share wines “in the making” and explain the stage a particular wine we tasted was in and what was still to be done for its completion. Everyone left happy, and so was I! I always have a good time when I talk about wine and share my passion with others! While enjoying some delicious food…

Oh well, it’s time to get back outside and check on those hay bales again. The forecast for the rest of the week looks pretty warm, for now.