You keep me rocking all of the time.

Which is a good thing this time of year. After one of the busiest weeks of Crush thus far we got to celebrate with...an even busier week. The last of the Ingle Vineyard Riesling came in looking fine. We have left a few rows for a Dessert Wine, but the rest of the Riesling is now happily (for the most part) bubbling away in stainless and will continue to slowly eat-up sugar over the next 3 weeks or so. We also got heavily into Reds this week. First up, we pressed Merlot. Volumes will be down, and the ripeness level is not on par with 2007 or 2012, but we'll try to coax some decent tasty treats out of it. Cabernet Franc followed close behind, with decent tonnage, but somewhat low Brix levels, and a definite 'leaner' character than optimal. However, we've been pleasantly surprised by how well some of the Reds from 'less ripe' years have developed before and I don't see any reason to be less than optimistic about our chances this vintage. Last in, and the last delivery other than grapes destined for Late Harvest and Dessert Wines, was Cabernet Sauvignon. If you've grown fond of the bell pepper character in Cool Climate Cabs, you might have something to look forward to. There are also some nice red berry notes coming through in the unprocessed grapes, so fingers crossed. Tonnage was again down compared to other years, so make sure you stock up when Eclipse Red is released.

A very fine place...to pick some, fine estate-grown Riesling from the vineyards overlooking beautiful Keuka Lake.
This past week saw everything shift into Hi gear, with the Vineyard in front of the winery being picked.  First up was a small crop from our oldest Block with some amazing, raw floral and fruit notes, and a little bit of minerality even at this early stage.  There was a little bit of 'good' Botrytis cinerea in the mix, which should manifest itself in some apricot notes post-fermentation.
The next day we picked the rest of the Vineyard, which mainly consists of some younger Riesling vines.  Crisp acidity.  Lovely fruit flavours. And, as an added bonus, yields were higher than we anticipated.  Don made the call early in the Winter to leave a few extra buds on the canes prior to pruning to compensate for the Polar Vortex that had already been gripping the Northeast and it paid off with a bit more fruit then expected.  Bonus.
Saturday saw the arrival of the first of the Bordeauxs.  We accepted delivery of some nice, handpicked Merlot which now rests comfortably in a tank and several bins for fermentation.  We looked to be picking our own Cabs form Ingle Vineyard early next week as the jump to Lightspeed continues.

We were honored to host our Harvest Sweepstakes Winners this past week.  Chad and Jen from Portland, Maine had the pleasure of helping pick and process the first lot of Ingle Vineyard Riesling this year, as well as enjoying lunch with John and a Library Tasting with Bernard later on.  Congratulations, Chad and Jen!
We're well into it now, with Riesling coming in from 3 different lakes in the past few days, and looking very nice.  We should be getting more Ingle Vineyard fruit in the coming days, although a glance at this week's weather forecast is not very promising.  The vineyard at Heron Hill will likely be on hold until early next week, with the Reds coming in in short order afterward. 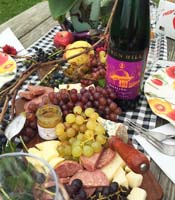 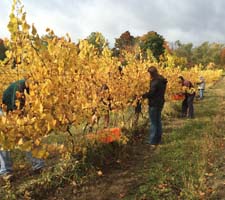 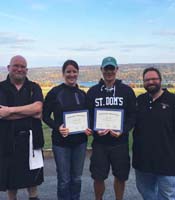 Once. Twice. Three Times A Lady!

But I'm not sure I love you when you show up 3 hours late with the first load.
Today was already expected to be a pretty busy day, with 3 loads of Chardonnay from the eastside of Seneca Lake expected to arrive starting at 10am.  Equipment issues at the Grower's end lead to a delay in arrival, with the 1st truck finally showing up at just after 1pm, so 3 hours later than planned.  Oh well, these things happen during Crush, and you just have to roll with it.

We were pleasantly surprised to find out that we were receiving more grapes than we had requested, which will definitely help alleviate some future supply issues down the line. The Chardonnay graped came in at normal Brix levels for Cool Climate Chardonnay, although the berries were a bit smallish.  We should see some good results from theses grapes next Summer when we begin to release 2014 white wines.
The delay allowed us time to catch up on a few other things around the Winery and in the vineyards, with some housekeeping, tank cleaning, mowing, paperwork and miscellaneous other duties all being done while we waited the arrival of the grapes, so the time was not wasted.  On the slate for tomorrow -- pressing of the Ingle Vineyard Pinot Noir.  Time to put that Baby to bed!

I Washed My Hands In Muddy Waters!

Well, it wasn't really mud.  And I'm not sure that water is an apt descriptor either, but there was likely SOME water amongst all the other detritus I pulled out of the screens leading to the drains.  Ah, the glamour and romance of harvest life!
Anyway, the Chardonnay from Ingle Vineyard started coming in today. A very acceptable 21.5 to 22 degres Brix with pH's in the 3.2-3.3 range, and some fabulous flavours and aromas -- lemon, melon, a bit of green apple and some grass.  Should make a couple of excellent single vineyard wines, or possible a Reserve wine, in the coming months and years.  Once again, tonnage is an issue.  The vines on the west side of Canandaigua Lake didn't necessarily like last winter too much.  Last year was also a bumper crop from these vines, and yields tend to be cyclical -- abundant one year, not as much the next.  The weather conditions the previous year during the period when these vines were setting buds for this year also plays a part.
The last few days saw us moving a lot of juice off lees in the Cellar to prepare them for fermentation.  We also spent quite a bit of time inoculating some juices that were ready to go and managing some fermentations that were already started.  The Ingle Vineyard Pinot Noir is pretty much done fermenting and is undergoing a bit of a longer maceration to extract some extra flavour and aromas.  Wonderful berry fruit and rose petals or aromas of violets are coming through on the nose.  We will likely press it out early next week.

All The Small Things

More low-lying clouds this morning, with the heaviest bit seeming to be sitting right at the entrance to the Winery on County Rte 76, making visibility limited.  The headlights of an oncoming SUV only appeared through the fog about 20 feet, making the left turn up the drive a bit more exciting than necessary.  By the time I reached the lower parking lot, I was above the clouds, and the Winery sat majestically in front of me. 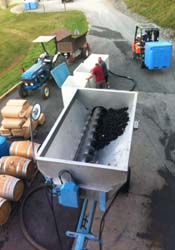 Lots of stuff to do today.  It began with the return of some barrels we had stored off-site for awhile in order to complete the Cooling Project in the Cold Room.  Most of the barrels were 2012 reds that will come out of barrels shortly, soon to be refilled with some of this year's bounty.  A slow moving project what with the press pad being somewhat cluttered with the various pieces of equipment needed to process the grapes coming in.

First load in: 7.3 ton of Pinot Blanc from Jeff Morris over on the west side of Seneca Lake. Nice and clean and 21 degrees Brix. Luvly Jubbly! A bit more than originally estimated earlier in the week, so a nice surprise and may lead to a nicer surprise sometime next Summer.  Wink! Wink! Prior to the first press load being finished a nice little light show started, coming from the SSW.  Not much rain with it, just enough to be annoying, and a few bolts in the vicinity.  The show lasted on and off right through the 2nd press load, with a few lightning strikes a little too close for comfort when you're standing around all that steel. 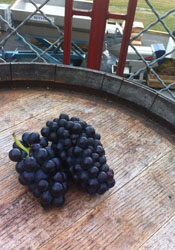 During late afternoon we saw the arrival of the first grapes from John and Jo's Ingle Vineyard on the west side of Canandaigua Lake. Pinot Noir showing very nicely at this stage. Clean fruit. Just wish we had a bit more of it. The brutal Winter we experienced last year had a devastating effect on many varieties throughout the Finger Lakes, with Pinot and Merlot being particularly impacted.  The exceptional weather we have experienced the last few weeks has helped out nicely in the development of ripening in all varieties after a late start to the Season.  When it was still in the 40s in May the outlook wasn't as cheery.
Well, almost time for a pizza and a beer, then bed!
Mas tarde!

And So It Begins

Mark Patterson joined the Heron Hill winemaking team in May 2014. Mark will provide updates throughout Harvest 2014.

Our Harvest 2014 began on Friday, September 26, after the first day was pre-empted due to our Glycol Cooling System not being available.  First in: 3.42 ton of Seyval Blanc destined for Game Bird in a few months.  A soft start, really, but one that helps get a few "gremlins" out of the way.
A bit of an inauspicious beginning Friday morning, with some fog cover as I drove up the hill from Hammondsport on County Route 76.  Starting just before Keuka Lake Vineyards the fog grew heavy. Visibility was limited to only a few feet.  A real Pea Souper. Just as I approached the beginning of the estate vineyards at Heron Hill, there was a break in the miasma -- glorious sunshine broke through all around. 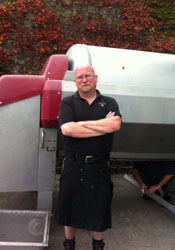 (A first day of Harvest ritual -- here's Mark wearing his utility kilt)
After some last minute set-up, the load arrived from one of our contract growers near Penn Yan and the first grapes of the Season found their way into the hopper for processing, through the crusher-destemmer, and onwards into the Press.  The Press was started and the first juices began to drip into the Press pan at 21 degrees Brix! The juice was pumped into a jacketed tank for cold-settling of the bits of skin, pulp, and other detritus that we don't want in our clarified juice during fermentation and the first day of Crush was coming to a close.
As the other lads began breaking down the crusher-destemmer, hopper and lines for clean-up, it was time to tackle some Marechal Foch that had been 'hot-pressed' for us at another facility. Hot-pressing is widely used to process French-American Hybrids like Foch, DeChaunac and Baco Noir in order to tone down some of the more, let's call them, 'interesting' flavours and aromas found pre- and post-fermentation in these cultivars.  About 1500 gL put to bed to settle for a few days under cooling, and it was time for this lad to toast the arrival of a new Crush with several pints of IPA and a Fish Fry!